On men’s faces at different stages of history there has always been a beard. It often served as pride for men, it protected from the cold, was a hallmark of the class.  It was often grown or banned;  it came into fashion, it was considered a relic of the past. In the modern world, a beard has become fashionable, because with a beard a man looks more courageously, that is why many members of the stronger sex are increasingly thinking about how to grow a uniform hairline on the face.

For modern men, the problem of slow facial hair growth is quite relevant. Many are saddened by the lack of a thick beard or mustache.  What is the problem?  Why do men grow or not grow a beard and mustache?

HAIR BULBS ARE SENSITIVE TO THE TESTOSTERONE.

Even among the most ancient people we know of, there were no bearded women. They did not immediately appear bearded. It is not surprising that the beard and mustache are exclusively male adornment, since a hormone called testosterone is responsible for their growth. It is found in women’s body in an insignificant amount, so they do not develop excessive vegetation on the face.  The appearance of a beard in a representative of the fair sex is an unkind signal, which is an occasion to consult an endocrinologist.  The different content of testosterone is also an answer to the question why men have a beard that grows differently, because often it is associated with a violation of the hormonal background.

The average duration of facial hair growth in men is not specified. Professionals say that for about a month, the bristles should be a sufficient haircut.  If at the end of the term the length of the beard leaves much to be desired, then you should think about the reasons why the hair does not grow.

What have an effect on the growth of the beard and mustache?

There are several important factors that have a significant effect on the growth of hair on the chin and cheeks. Before starting self-medication, it is recommended to find out the main reason that hinders the optimal growth of beard and mustache.  The most reliable option is the consultation of a trichologist or endocrinologist. Only after a full examination, specialists can tell the real reason for the uneven or slow hair growth and indicate a way to solve the problem.

Reasons why beards do not grow?

Today, there are a number of negative reasons due to which the males have uneven hair growth on the face.  Often they include: Genetic predisposition.  If the male family line shows a lack of facial hair, it is possible that the reason is poor genetics.  The impact of this factor cannot be eliminated without medical intervention.  Perhaps the only way to eliminate the uneven development of the bristles is a hair transplant in the beard or mustache.

Low level of testosterone in the body.  This hormone is the most important when growing a uniform hairline on the face. You can increase its level through regular physical activity or with the help of special medications. Wrong way of life. In the modern world, it is increasingly possible to meet men who lead an intense rhythm of life, that mean they do not get enough sleep, eat junk food, get nervous, are in a stressful state. Exactly these factors that have a direct impact on the productive work of hair follicles.

Lack of vitamins and minerals.

Improper nutrition.  We are talking about the use of a large number of estrogen-containing products. In this regard, it is worth mentioning that one of the most harmful products in this regard is beer, which increases the level of female sex hormones in the blood of men.  The second aspect of malnutrition is the daily consumption of high-calorie and fatty foods, leading to overweight.  Further, adipose tissue also has a hormone-producing function, increasing estrogen levels.  Confirmation of this theory can be seen in life, when many obese men have thin beard hair, and their growth time is significantly longer than that of other representatives of the stronger sex.

Small physical activity.  Despite the fact that many men do not see a connection between how much a beard should grow and playing sports, there is a dependence.  Regular physical activity helps the body to produce the proper amount of male sex hormones necessary for stubble growth.

WHAT TO DO IF THE BEARD AND THE MUSTACHE DO NOT GROW? 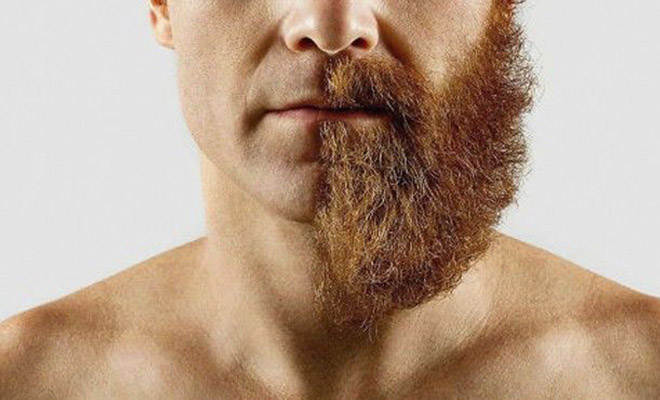